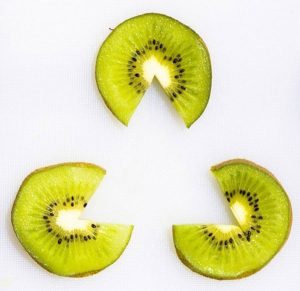 Euclidean geometry often seems to be the most difficult area of the curriculum for our senior phase maths learners. Geometry riders don’t succumb well to procedural methods: there are no “steps” that a learner can commit to memory and follow rigidly to reach a solution. Instead the learners are given a number of theorems and their proofs and after some basic practice at recognising the configuration of the theorems they are given increasingly difficult riders to solve. The diagram and given information should point them in the direction of a solution; sometimes scaffolding questions ask for sub-proofs before a final difficult question. But solving the problem depends on them building a chain of deductive logic to reach a goal, where every step of the chain must be justified by a theorem or a given item of information. And for many learners this is really, really difficult.

The van Hiele theory of geometric learning suggests that learners need to progress through a hierarchy of levels from recognising and describing shapes, through analysing and then abstracting them before they are able to produce a formal proof. At each level new language and ways of understanding are opened up and these must be internalised before the learner can proceed to the next level.

Van Hiele levels of geometric thought, based on Alex & Mammen (2012).

Alex & Mammen (2012) showed that only 9% of South African Grade 10 learners in their survey were able to reason at van Hiele level 3 – which is hardly surprising since it appears our Grade 7 teachers really don’t “get” geometry (van der Sandt, 2003). So we have a situation where most of our senior learners do not recognise the relationship between properties and a reasonably competent Grade 11 learner asks a question like “Can a triangle have two 90o angles?” Ok, when she saw the way I looked at her she stopped and thought for a little and then slapped her forehead. But I think if I had stopped her and probed for understanding of how that question links up with parallel lines I would have seen that her thinking was really only at Level 2.

In Grade 11 in South Africa, Euclidean geometry focuses on circle geometry and covers 9 theorems; by the end of this section of the work, learners are faced with exam questions (riders) similar to the one shown below in which the proofs must be formally stated in two-column form. 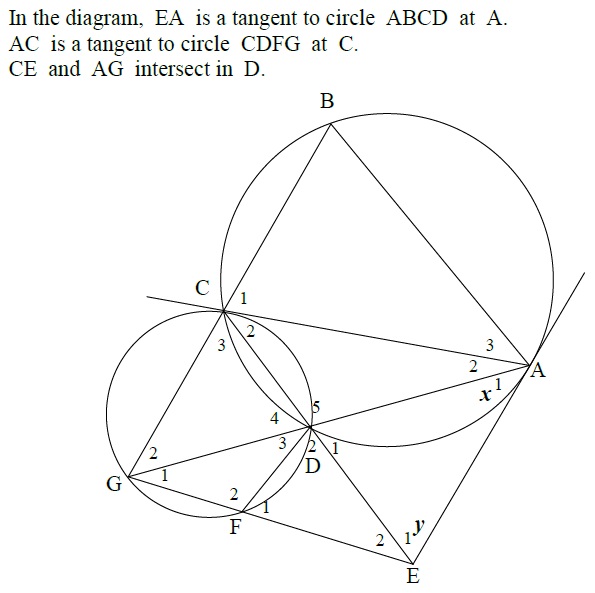 For learners who are at van Hiele level 2, this type of question in an exam is terrifying.

The importance of fluency

The problem of how to help those of my Grade 11 learners who really struggle with Euclidean Geometry weighs on my mind at this time of year when final exams are looming. So when I read the article “How I Rewired my Brain to Become Fluent in Math” by Barbara Oakley it really resonated with me. Read it for yourself; she gives insight into some of the things that make mathematics so difficult for kids – and yes, I am looking at you, South Africa! She writes about how the culture of getting kids to understand what they are being taught has resulted in a skewed emphasis:

“The problem with focusing relentlessly on understanding is that math and science students can often grasp essentials of an important idea, but this understanding can quickly slip away without consolidation through practice and repetition. Worse, students often believe they understand something when, in fact, they don’t.”

These are the kids who say, after they have struggled with their homework: “But I really understood it when you did it on the board”. Or when they have difficulties in the June exam with work that was covered at the beginning of the year: “I understood this in January, but I just can’t do it anymore.”

What I had done in learning Russian was to emphasize not just understanding of the language, but fluency. Fluency of something whole like a language requires a kind of familiarity that only repeated and varied interaction with the parts can develop. Where my language classmates had often been content to concentrate on simply understanding Russian they heard or read, I instead tried to gain an internalized, deep-rooted fluency with the words and language structure. I wouldn’t just be satisfied to know that понимать meant “to understand.” I’d practice with the verb—putting it through its paces by conjugating it repeatedly with all sorts of tenses, and then moving on to putting it into sentences, and then finally to understanding not only when to use this form of the verb, but also when not to use it. I practiced recalling all these aspects and variations quickly. After all, through practice, you can understand and translate dozens—even thousands— of words in another language. But if you aren’t fluent, when someone throws a bunch of words at you quickly, as with normal speaking (which always sounds horrifically fast when you’re learning a new language), you have no idea what they’re actually saying, even though technically you understand all the component words and structure. And you certainly can’t speak quickly enough yourself for native speakers to find it enjoyable to listen to you. This approach—which focused on fluency instead of simple understanding—put me at the top of the class.

She used a similar strategy when she returned to learning mathematics as an engineering student in her mid-twenties.  In an equation she would first internalise the meaning of each variable. Then she would memorise the equation and practice what it meant, what the implications of the relationships were. For example in Newton’ second law F=ma, she would play with the components: “If m and a were big numbers, what did that do to F when I pushed it through the equation? If F was big and a was small, what did that do to m? How did the units match on each side?” Repeated practice, and thinking, and playing with the ideas built up her schemas or mental models of how the equations worked. 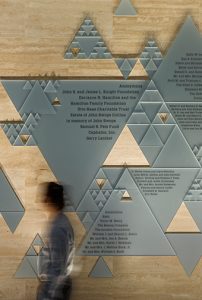 Display by Poulin Morris at the Franklin Institute

Geometry tends to be a part of the curriculum which is shuffled to the end of the year, and only completed “if we have time” and in many classes this doesn’t happen. Little children need to have opportunities to play with physical representations of shapes; bigger children need and to be prompted to think about things like: If I squash this triangle this way, what happens to that angle? If I make this side shorter, what happens to the angles? If this angle gets bigger, which side will grow? It is all very well to know that the interior angles of a triangle sum to 180o, but that remains just book learning if they are not encouraged to “play” with that idea, in the way that Barbara Oakley played with F=ma. And this understanding of the ratios of the sides and the angles in fundamental to learning trigonometry.

And in mathematics the required fluency only comes with mindful distributed practice.  The good news is, it is never to late to learn.